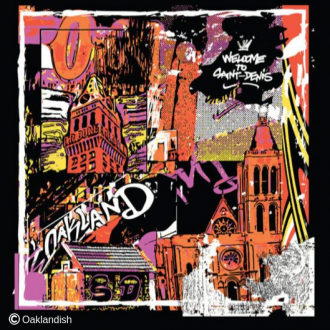 It has been an incredible privilege to join this potent cultural collaboration organized by Paris’s Counsel General of San Francisco. Conceived by cultural attachée, Juliette Donadieu, our platform compares and contrasts the economic and civic role of the arts in the Bay Area and the Grand Paris region of France, turning our attention—not only to San Francisco and Paris proper—but to the neighboring cities of Oakland and Saint Denis. These two cities share many features and face similar challenges, amongst them the fast urban development and the changing role of cultural stakeholders within this transformation. The goals of the Oakland & Saint-Denis International Cooperation Project are to examine the metropolization of our territories and the role of cultural and artistic actors in urban development, and to connect local public debates to a transnational conversation, giving voice to both French and Californian cultural workers who share similar values, skills, and obstacles and ambitions.

Throughout two learning expeditions, successively in Saint-Denis (France) and in Oakland (California), French and American professionals - urbanists, artists, architects, scholars, urban planners - shared our experiences and points of views on how to build more creative and inclusive cities. Intercultural exchanges pave the way to local and metropolitan experimentations through artistic productions in both territories to explore new methods and confront different conceptions of innovation.

Interested in learning more? Start by watching our documentary recounting the two learning expeditions! This 14-minute video beautifully highlights the strength and vitality of the two cities and its inhabitants and their willingness to change things for the better.

Find more information on this project and its partners and stay tuned on future projects - a publication, public conversations and performances. We expat to enlarge the conversation in the Fall of 2020 at UC Berkeley and at national gatherings on the future of the arts and humanities.

The Oakland/Saint-Denis cooperation project is an initiative of the Cultural Services of the French Embassy in the United States in collaboration with the French American Cultural Society, California Humanities, the Institut Français and Légendes urbaines.