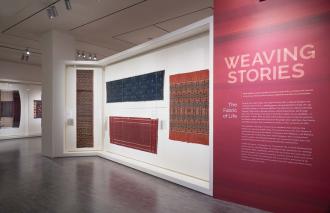 Whether it’s a favorite T-shirt, a tattered blanket loved since childhood or a cloth heirloom passed down for generations, fabrics have long been imbued with memory and narratives that shape one’s identity. “Weaving Stories,” an exhibit at the Asian Art Museum of San Francisco, highlights this relationship between cloth and identity through displaying various textiles and garments made by women from the islands of Southeast Asia.

Associate Curator of Southeast Asian Art and UC Berkeley alumna Dr. Natasha Reichle curated “Weaving Stories,” which exhibits handmade textiles and garments that have long served as personal expressions of self. Though many of these textiles date back to the 19th and 20th centuries, they communicate a sense of importance that remains relevant today.

“For many of us, the textiles that have been passed down for generations are our favorite things that we’ve worn threadbare,” Reichle said in an interview with The Daily Californian. “They’re not necessarily those pristine, beautiful, flawless objects, but they’re objects in which meaning has been built via the person who made them and the person who gave them, generations of use or used during ceremonies.”

From gold threads casting glints in the light to images of indigo leaves against a milky white background, many of the textiles look brand new. Others show signs of wear through their thinning structures or frayed edges.

“(The worn textiles) were intentionally put in there (to) show signs that the people wore them, used them and valued them,” Reichle said. “Showing someone cared about this enough that they repaired it or they repaired it over and over again gives it this life and a history.”

Most textiles were crafted by individual women, sometimes taking months to produce. However, depending on the techniques involved, assistants may have helped with arranging threads, dying or patterning.

A magnified camera brings museumgoers closer to two textiles, highlighting the excellence of the metal-wrapped threads that give garments a shimmering life as well as the precision of the meticulous ikat technique that involves dying a pattern into the threads of fabric before weaving begins.

“I definitely see (these women) as artists and I think your work can be art,” Reichle continued. “Even if it’s something that you are employed by someone to do, it can still be art — their skill on so many levels, their ability to conceive complex patterns, to know the chemistry of dyes, to know the technicality of how to weave something and just the spectacular end product.”

Spirituality also played a part in creating many textiles. From stylized scripts to mythical creatures, the impressive designs and colors of each textile offer protection in varying ways across the communities of Southeast Asia.

“In a lot of older weaving communities, you have the belief that there’s a goddess of either the fiber or a goddess of weaving who actually inspires the weavers themselves,” Reichle explained. “Textiles as being somewhat protective is probably something very universal throughout the world. Wrapping or swaddling a baby is not only to keep them from crying, but also acts as this sense of safety in keeping them warm and protected — and that moves in all sorts of directions.”

Each textile evokes its own narrative, but histories cannot always be easily inferred. One garment featuring colonial emblems was frequently worn by European colonizers and their families. However, the garment is captioned with an archival photograph of an Indonesian tea plantation worker dressed in a similar cloth.

“It was really interesting coming and thinking one thing and then finding this photograph and these oral histories, which gave me another picture of what the textile might have been used for,” Reichle said. “It seems likely that the plantation owners commissioned a bunch of textiles to be made to supply to their workers. It’s not a handmade batik; it’s something that was made with stamping, so (the textile) was probably mass-produced to be a sort of uniform of the workers there.”

Museumgoers are invited to weave their own stories into the exhibit through sketches or a written description of a piece of cloth that has shaped their own identity, threading in a contemporary acknowledgment of the universal importance of textiles.

“I think sometimes people would think of a show (like “Weaving Stories”) as extremely niche, something that doesn’t necessarily relate to them,” Reichle expressed. “One thing I’m hoping to do is to show how textiles are so much a part of everyone’s identity and how a show like this can talk about so many things that are important to people — faith, status, women’s roles, all those things.”