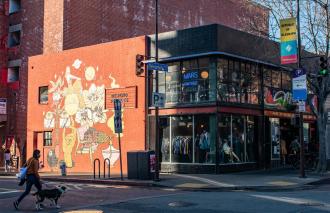 A UC Berkeley senior and co-founder of Telegraph for People, Brandon Yung said he saw the project as an opportunity to make Telegraph a car-free zone — an idea that has been discussed for many years. According to Yung, “Option Five” features a possible design to filter out private automobiles, an important step toward combating climate change.

“The biggest motivation for us is going about this advocacy from the perspective of climate change and having our cities transition away from car dependency,” Yung said.

Yung’s “Option 5” comes in response to efforts by the Berkeley Southside Complete Streets Project, a city initiative that seeks to improve the conditions for “people walking, biking, riding transit, driving, and delivering goods and services in Berkeley’s Southside neighborhood,” according to the website.

On Jan. 27, the city will host its second open house to discuss the future of the streetscapes on Telegraph Avenue, Bancroft Way, Fulton Street and Dana Street, according to an announcement on the project’s website.

Executive director of the Telegraph Business Improvement District, or TBID, Alex Knox, stated in an email that once plans are put together by the city, TBID and its stakeholders will review and respond to the city’s proposal.

Knox expressed concern about the potential impact certain car-free models could have on businesses located on Telegraph.

“It is fair to assume that a car-free change would harm business operations and reduce the viability of certain business models on the Ave,” Knox said in the email. “There would need to be detailed consideration of the many moving parts that are involved to understand the potential benefits of that change.”

Yung addressed concerns on the impact on businesses, stating that “Option Five” is designed to maintain accessibility for commercial loading vehicles.

City Councilmember Rigel Robinson, a longtime proponent of a shared street model, said he hopes the city will decide on a proposal that best meets the city’s “ambitious plans for the operation of the street in the future.”

“There may be no better neighborhood than Telegraph and Southside to demonstrate what a green, walkable district can look like,” Robinson said.

According to Yung, the city voted in 2012 against a Bus Rapid Transit project, which Robinson viewed as “one of the greatest missed opportunities of the last decade in Berkeley.”

Robinson brought an item to the city council in 2020 calling on the city to reverse its position on the issue. The proposal was approved by the council, which according to Robinson means the city is now ready for a project such as a car-free Telegraph.

“The advocacy from students and residents on this project is critical to maintain momentum and help the city dream big,” Robinson said.