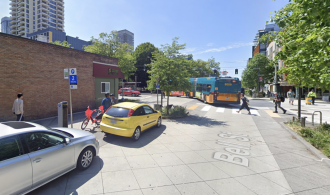 City backs bus lane for Telegraph Avenue, but merchants aren't on board

Some of Berkeley’s most recognizable blocks are poised for a major makeover.

City officials working to update the northern end of Telegraph Avenue have zeroed in on a plan that would reserve one of its lanes for buses between Dwight Way and UC Berkeley, while also raising the street itself to create a curb-free plaza along some of those four blocks. It’s the marquee piece of an $8.3 million plan redesigning streets in the campus-adjacent Southside neighborhood to dedicate more space to people on foot, bike and public transit.

Many of the area’s business owners, who fought to block plans for a Telegraph Avenue bus lane more than a decade ago, remain opposed to the idea. On the opposite side of the debate, a vocal coalition of students and transit advocates who want the avenue’s northernmost blocks to be entirely car-free is disappointed the city’s proposal stops short of their goal.

But backers of the vision recommended by Berkeley’s Transportation Division say it will dramatically improve how residents and visitors get around the bustling neighborhood.

“This work is about returning the streets to the people,” said Councilmember Rigel Robinson, who represents the area and hailed the proposal as a “truly radical transformation of Telegraph Avenue.”

Plans for the redesign, called Southside Complete Streets, will go before the City Council on Feb. 22 for approval. Construction is set to start next year, with funding from state and county transportation grants.

City staff endorsed the bus lane plan after considering several options for redesigning Telegraph Avenue. On the two blocks between Channing Way and campus, plans call for Telegraph to have a raised roadway level with the sidewalk, with bollards and other barriers lining traffic lanes to keep pedestrians safe. The blocks between Channing and Dwight would have curbs, but they would be smaller and more rounded than those that exist now.

The project will not make any changes to the stretch of Telegraph south of Dwight Way.

Three other Southside streets would see changes under the proposal: On Bancroft Avenue, planners want to extend an existing bus lane to Piedmont Avenue, while also building a new protected two-way bicycle track that would run from Piedmont Avenue to Milvia Street, where it would connect with another set of recently upgraded bike lanes. Dana and Fulton streets would also get new two-way bicycle tracks between Dwight and Bancroft.

“We can really make walking and biking more comfortable throughout the entire Southside,” Craig Schoenberg, a senior engineer with Toole Design, the firm Berkeley contracted with for the project, told the audience at a virtual open house last week.

Making room for that bus and bike infrastructure will mean devoting less space on the road to people in cars. Some streets would have fewer lanes for car traffic, and overall the project would require “a pretty big decrease in on-street parking space,” Berkeley Senior Transportation Planner Eric Anderson said at the open house.

Supporters say the new and extended bus lanes will mean faster and more reliable trips for public transit riders, who would no longer get bogged down in traffic created by private cars.

But the concept has long faced opposition on Telegraph Avenue — in 2010, Berkeley rejected AC Transit’s plans for bus lanes along the entire length of the corridor, which would have linked the city with the East Bay bus rapid transit line that today runs through downtown Oakland and San Leandro. While the latest plan would be much less extensive, it is encountering similar resistance.

“We don’t think it’s the right fit for the Ave,” Telegraph Business Improvement District Executive Director Alex Knox said of the bus lane proposal. “We want to prioritize the somewhat limited space for more balanced access for all modes of transportation.”

Some business owners worry that taking space away from cars will add to traffic congestion in the area and make patrons less likely to visit. Many are concerned the redesign could reduce the amount of loading space on their blocks, especially secondhand and vintage shops that rely on customers hauling in items to sell, or restaurants that have become increasingly dependent on delivery services.

The city’s proposed changes would keep loading zones on Telegraph Avenue, but it’s not clear whether spaces might be lost in the redesign; Anderson did not respond to requests from Berkeleyside for more specific information about the project’s impacts on loading space.

Unlike nearby Bancroft Way, which carries multiple AC Transit and campus shuttle routes, Knox noted only one bus line serves Telegraph Avenue — a dedicated lane, he said, would therefore amount to an “over-prioritization” of transit.

Others were more blunt.

“The business on Telegraph is going to hell, and what you are doing is putting the nail in the coffin,” said Ken Sarachan, the owner of Rasputin Records and several other properties in the neighborhood.

Sarachan, who like other merchants opposed the prior bus rapid transit proposal, excoriated the city’s plan in comments at last week’s virtual meeting, saying the bus lane was “like the monster in the monster movie, recurring with the same old ideas.”

City staff have endorsed this planned redesign of Telegraph Avenue, which would create a new dedicated bus lane. The plan will go before the City Council on Feb. 22. Credit: City of Berkeley rendering

Proponents of the bus lane contend Berkeley’s political climate has shifted in their favor, however.

“A decade ago, the city passed on an opportunity to build bus rapid transit down Telegraph to the gate of campus — largely as a result of concerns from the merchant community,” Robinson said. “In the time since then, I think this city has realized that was a mistake.

“I hope we can see this as an opportunity for growth,” he added, “and not let near-term fears about construction and change stop us from doing what’s right for the whole neighborhood, and for the city, and for the climate.”

Brandon Yung, a UC Berkeley senior who co-founded the group Telegraph for People to lobby for a vision of the avenue where private cars are banned outright, said he was happy to see “retrograde” opposition to the transit lane hadn’t swayed city officials’ final proposal.

The project’s staff and consultants did not consider a car-free proposal among the options they studied for Telegraph Avenue, despite lobbying from Yung’s organization. Telegraph for the People members drew up their own vision for the avenue that would include broad sidewalks and a single lane for buses and commercial vehicles, which could be flanked with loading zones to address merchants’ needs.

Cindy Zerger, Toole Design’s urban design director for California, said the project was focused on Telegraph’s physical infrastructure, not “operational changes” such as barring cars entirely. Still, Zerger and Robinson — who has endorsed making Telegraph car-free — say this project won’t close the door on that idea, because the rebuilt avenue could be adapted for a future without private vehicles.

“We know that’s an important conversation that is going to continue,” Zerger said.

Yung, a former Berkeleyside freelance reporter, said he can accept the proposal put forward by city officials as a step toward his ultimate vision for the avenue. He hopes to see the City Council approve the plans and endorse working toward the car-free concept when it acts later this month.

“This absolutely feels like a new era of transit politics and planning in the city of Berkeley,” Yung said. “We’re just hoping that it goes even further.”