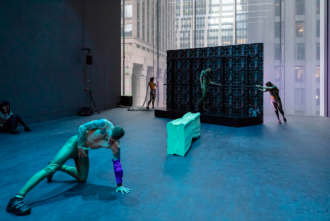 I had heard through the grapevine that MoMA was going to be presenting new choreographic installations by Adam Linder.  Linder had visited the Bay Area a year earlier as an artist-in-residence at the Wattis, and I wondered if I would have a chance to see his offering in the MoMA galleries.  When Stuart Comer--MoMA’s chief curator of media and performance--asked me to ‘pen a piece’ for MoMA’s online Magazine, I jumped at the chance. Herewith, some reflections about the relationship between visual and performing art forms, or what it means to make…Museum Dance…Now.

How does Adam Linder’s Shelf Life reframe the ways in which we see and experience performance in a museum?

“Mickey, are you there? Justin, are you okay?”

By this point in the history of the 21st-century modern-art museum, visitors are perhaps less surprised by the appearance of performance in the gallery—and less surprised that one of those galleries is now called a “studio.” Museum visitors know that they will jostle among positions as beholders, audience members, and sometimes participants. A little over a decade ago, however, many were still surprised—and confused, agitated, shocked, and sometimes thrilled—by the sentient presence of a museum performer.

There is a rich history of performance in visual art spaces—from Surrealist soirées to Allan Kaprow’s Happenings to Judson Dance Theater’s experiments to Body Art interventions. But around a decade ago, performance seemed to reappear in a new form, one that was actually an old form. Trained dancers, trained musicians, trained opera singers, and trained theater artists started showing up in museum galleries; their appearance forced a slightly different conversation about how the museum’s historic investment in “performance art” squared with a new kind of investment in…well…“the performing arts.” Together with Nashat, Linder’s offering at MoMA gives us a chance to reflect about the status of museum performance now—and to ask what new surprises this form might have in store.

“How do you feel when someone says that they have discovered something that you’ve known all your life?”

Linder’s Shelf Life is unusual in that it dances with a partner: an installation of sculptures and video composed by Shahrayar Nashat for Force Life. In brochures—or are they programs?—made available by the Museum, both artists tell us that they are preoccupied with three modalities: the “Brain,” the “Barre,” and the “Blood.” Nashat makes each concrete in the cool intellect implied by marble sculpture, in a partially crushed post-Minimalist block-cum-Barre, and in a video art piece that pulses with the life and Blood of a figure who lies prone before us on the floor. As the dancers enter the Studio, they move around these objects, look at them, look away from them, dance near them. Once Linder’s piece begins, are the objects now props? Is the installation a set? One might keep asking such questions as the dancers turn the video on its platform—a rotating set—to reveal a ballet Barre suspended amid the wires behind the screen; Nashat’s backstage has become Linder’s frontstage, revealing a Barre in new form.

Meanwhile, the robotic voice-over continues, hailing the dancers as they move: “Mickey, are you there? Justin, are you okay?” The audience soon realizes that this voice is coming from a dancer; a dancer with a mic is voicing over the dancing on the floor. What to make of the slight shock in hearing a moving body talk? For Linder, this might be a moment to reflect on dichotomies of “right Brain/left Brain,” to linger on the pairing of what he calls “the analytic and the expressive,” a dichotomy that is unhinged when “the body is vocalizing whilst moving” (Uglevig). In fact, two dancers will be vocalizing movers throughout this piece, continually asking questions that shuttle between the literal and the metaphorical, between the provocative and the mundane. “When did you realize that you were a boy?” “Who has ruined everything, the Boomers or the Millennials?” One dancer lingers at the Barre, arranging feet and arms in successive balletic positions to display the virtues of practiced virtuosity. Meanwhile, the vocalized interrogations continue: “Is rhythm culturally-specific?” “Is culture rhythmically specific?” A second dancer seems to answer such questions when freed to move throughout the space, pulsing with the Blood of many movements that run, tap, swing, slide, grind, pop, and shake. “Who controls the air in here?” A third dancer seems to ask this question of a fourth dancer; these two are paired as a couple, following each other around. Lowering on all fours, they engage in interspecies gestures that stare, twitch, stalk, purr, crawl, and pounce. Watching from our place against the wall, visitors witness a multi-sensorial mix of kinetic spectacle and textualized sentience.

But the question lingers: Who does control the air in a museum dance? Is it the choreographer or his “delegated” dancers? Is it the curators who selected the choreographer? Or is it perhaps the usher—or rather security officer—who worries about safety? Maybe the air is controlled by that man with the iPad standing in the back, the one who controls the lighting, screens, and sound of the space. If this was a theater, this figure would be a “stage manager,” one who calls cues in a booth. Because we are in a museum, he stands among the visitors and dancers, nimbly and discretely adjusting levels, breathing in the same air that we do.

“Do you think Minimalism can be sexy? Is it really ephemeral if it’s all over the Internet?”

So, what to make of museum dance now? Do we need to trot out the old modernist critiques of Minimalism’s theatricality? That argument worried that Minimalism’s simple structures were having excessive effects, forcing viewers to confront an unwelcome anthropomorphism as well as their implicated relation with the artwork. “Everything counts,” was Michael Fried’s anxious critique, “even, it would seem, the beholder’s body” (Fried). Are we worried about Minimalism’s bodies? Or can we just jump ahead and call them sexy? On the one hand, choreography calls the bluff of Minimalism by offering a physicalized theatricality far more sentient and more sensuous than either Minimalism’s celebrators or its detractors might have imagined. On the other hand, dance is a form with other things to say and to do; it has goals and effects that may not be measurable by a Minimalist or post-Minimalist yardstick. How can we foreground more possibilities of museum dance, in how we talk about it, how we experience it, how we let the artists experience themselves?

The same question might be asked of another frame that dogs the discourse of museum performance, the one that positions it as a symptom of a late capitalist service economy. This frame sees a parallel between art and labor by tracking a shift from the industrial production of material objects to the post-industrial production of experiences, services, and the immaterial flows of the digital sphere. If we believe this chronicle, the museum’s interest in moving from the display of so-called static objects to the presentation of so-called temporal performance keeps in step with the rise of an experience economy. The argument works. But are all the implications of museum dance exhausted by this frame? What happens when we recognize that—for the choreographer and for others trained in the “performing arts”—the “turn” to service hardly feels like a turn at all? Indeed, as Linder has noted, the performing arts have always operated on a service model, always been in the business of selling affective, ephemeral experiences. The post-Fordist museum seems to be discovering something that trained performers have known all of their lives and so this critique can seem a little belated; for Linder, it can feel “patronizing to the form” (Aran).

The performing arts have always operated on a service model, always been in the business of selling affective, ephemeral experiences.

Shelf Life is a canny meditation on these inherited arguments; the embodied vocalizations of its dancers ask questions that reference them. The title of the piece references them, too, vacillating between an association with the shelf of museum display and an association with the changing, impermanent condition of the art on view before us, and its material form. But Shelf Life also exceeds these arguments, opening the museum to past and future choreographic experiences that are not only interesting because they deviate from art’s objecthood. From the perspective of the dancers sweating on the floor and at the Barre, dance is not immaterial either.

For Linder, the time is right for noticing the material virtuosity and historic skill of the dancing body. In a note Linder shared with one of the Studio’s curators, Ana Janevski, he asserted, “Dance does not need to explain why it is in the museum any longer. It doesn’t need to validate itself through ideas around archive, proximity to objects, apprehending the audience through interactivity, etc. It just needs to dance.” As more museum dance makes its appearance in the Studio, we can look forward to sharing in the surprising juxtapositions and juicy physicality of bodies who excel at just dancing.