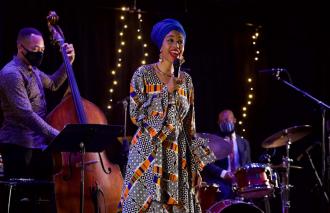 By
Francesca Hodges, The Daily Cal

Jazzmeia Horn needed no count-in as she sprang into song at the Zellerbach Playhouse on Dec. 10. This sudden introduction was the first of many surprises the singer and her band brought to the stunning performance that lasted nearly an hour and a half.

The first track, “Free Your Mind,” showcased Horn’s immense talent as a songwriter; her lyricism offered up soulful solace to the audience. The song filled the theater with personality, leaving plenty of room for Horn’s improvisations. Her vocabulary alone was something to behold, as Horn effortlessly produced a wide range of uncompromising sounds with her emotive syllables.

The three-time Grammy-nominated singer enunciated each of her notes in a way that enlivened the already vibrant performance. At the beginning of tracks, she would throw down her arms on a downbeat, jump up from her stool and stamp her feet in wild fury. Her scatting remained pointed, yet filled with a fluid vibrancy that contained textures unknown to most vocalists.

At times, Horn would lift her vocals up to a higher register and sing ever-so-softly, barely opening her mouth to pull out a whisper of impressive range. Her courageous runs sent her band into a tizzy, as it attempted to keep up with Horn’s unbounded voice. During slower tracks such as “Where we Are,” Horn demonstrated her ability as an artist to belt out ballads of love and loss, perched on her stool and clutching at her core, as if she was toeing the line between physical limit and the desire to share her vocal power.

When Horn slipped into spoken word, she grasped the audience’s attention with each grounding line that shared a social call about present intentions influencing future relationships. The pinnacle of the performance occurred during “Strive (To Be),” as Horn called upon the audience members to chant the song’s title as a humming back base for her track about liberation. As she delivered verses like proclamations, Horn’s vibrato framed the track with passionate dedication.

Horn brought great elegance to the stage, in a paneled gown that caught the light just so. The stage enveloped Horn and her band in hues that changed so often it was slightly distracting. During “Let Us (Take Our Time),” which Horn shared her parents called a “baby-making song,” a rich red enveloped the stage. While at surface level, the choice seemed a tad overdone, it did set the tone for Horn’s spoken word passages filled with poetic innuendos.

The small anecdotes Horn shared between tracks gave insight into her life offstage. Her charming, yet firm maternal hand appeared in her track “When I Say,” which Horn wrote about her two sassy and sweet daughters. The track jumped with rhythm and a beat that conveyed the attitude of a child, stubborn about having their way.

While Horn’s vocals swelled on center stage, she paid respect to her accompanying artists. Quick to introduce her three-piece band, with Keith Brown on piano, Kristopher Frunn on bass and Russell Carter on drums, Horn gave the band time to demonstrate its musical prowess and witty improvisations. Witnessing the countless musical relationships onstage was an intimate experience. Catching the small glances between each artist and their flashing smiles during complicated passages was a privilege only the front rows of the audience were privy to.

Finishing with a bold rendition of “Tight,” Horn paid homage to her mentor, Betty Carter, with zingy melodies that bounced off the surface of each instrument. A joyful dialogue ensued between Horn’s scatting and Brown’s piano, reminiscent of two close friends chatting. Horn brilliantly utilized the track to say her closing remarks, thanking Cal Performances, her fellow artists, her supporters and the audience.

Horn’s live performance took on a life of its own, as each improvisation came from the moment, specially crafted for the audience on that particular night. As Horn prepares for the release of her third studio album under her very own label, Empress Legacy Records, one can only wonder what new surprises she will share with her willing audience.