Yahya Abdul-Mateen II is an Emmy Award-winning American actor best known for his portrayal of David Kane, the Black Manta in Aquaman, Bobby Seale in The Trial of the Chicago 7, and Cal Abar in Watchmen.

After starring in the musical drama series The Get Down, Abdul-Mateen appeared in numerous films, including Baywatch, The Greatest Showman, and Candyman.

During his time at UC Berkeley where he became a member of Alpha Phi Alpha and competed as a hurdler for the California Golden Bears, a teammate suggested he take a theater class. He graduated with a degree in architecture, and then worked as a city planner in San Francisco. After being laid off, he applied to drama schools and ended up graduating from Yale with a Master of Fine Arts degree, then began his new career path as a stage actor. 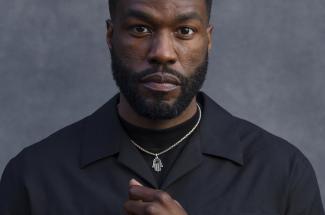