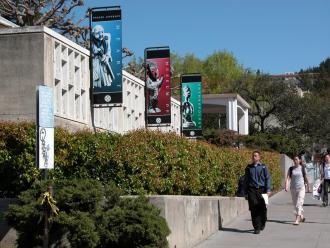 SAN FRANCISCO — Ted Hernandez, tribal historical preservation officer of the Wiyot Tribe, said bringing home the remains of ancestors from the University of California, Berkeley’s Hearst Museum of Anthropology has been a long process, involving many people. The university as well as the US Army Corps of Engineers San Francisco District announced on January 24 that they had repatriated the remains of 20 tribal members along with 136 artifacts (mostly beads and ornaments made of shells).

“People are more open to seeing the light and the truth and what occurred during the genocide,” Hernandez told Hyperallergic. “They’re realizing that the ancestors need to come home to their people.”

The remains are of Wiyot members killed in an unprovoked attack by a group of white settlers in 1860 during what’s known as the Indian Island Massacre. After construction of a waterway in the area, a team from UC Berkeley collected the remains in 1953 and put them in storage in the Hearst Museum, where they have been for the last 70 years.

The university repatriated the remains under the Native American Graves Protection and Repatriation Act (NAGPRA), a 1990 law outlining a process for museums and federal agencies to return Indigenous remains and cultural artifacts to their descendants.

Cutcha Risling Baldy, a professor of Native American studies at Humboldt State University, agrees with Hernandez that this means a lot — for the Wiyot as well as other tribes.

“I think this is a really big step in the right direction, and it’s a good model for other institutions to be empowered by the 1990 law,” Baldy told Hyperallergic. “When you see that and the celebration happening around that, it can reinvigorate fighting the thick layer of the bureaucracy, and tribes can see a light at the end of the tunnel.”

It’s his job, said Thomas Torma, campus NAGPRA liaison at UC Berkeley, to make sure tribes get back what rightfully belongs to them. A former committee dismissed the case in 2016, demanding unreasonably high levels of evidence, he said, but the current committee reevaluated it last year.

“It was a pretty open and shut case,” Torma said. “There are no other tribes that would claim that area. Humboldt county is definitely Wiyot.”

In the past, UC Berkeley has resisted repatriation, Torma said, but the policy on campus has shifted to actively support it and to work with the tribes in the last few years.

Lauren Kroiz, the curator of the Hearst Museum and UC Berkeley art professor, agrees. In an email, she wrote that the Hearst Museum has committed to prioritizing repatriation above all other activities since early in 2020.

A campus committee outside the museum makes decisions about NAGPRA, she added.

“As museum leadership, I’m grateful to be supporting them and, even more importantly, the Wiyot Tribe, in moving forward with repatriation,” she wrote. “We’re guided by principles articulated in the UC Office of the President’s Policy acknowledging that ‘… as long as Human Remains and Cultural Items remain in the University’s Control, healing and reparation will be incomplete.’”

Healing is one of the benefits for tribes when their ancestors come home, Baldy said.

“There’s a lot that happens in communities when items and people return,” she said. “People are finally able to start to mourn and heal and celebrate the lives of people. It’s a kind of rebalancing to what was unbalanced because of the violence of colonialism.”

Hernandez said he looks forward to the people who were kept in the museum being at peace.

“It’s always a great feeling to have our ancestors come home,” he said. “They’ve been locked up in boxes and cabinets without having anyone to talk to and sing to them.”

Like Baldy, this makes him hopeful for other tribes.

“People can see what Berkeley did with the Wiyot Tribe is as easy as one, two, three,” he said. “Just work with the tribes and the tribes are willing to work with you. Just have an open heart.”